Perfusion-weighted imaging (PWI) allows us to infer how blood traverses the brain’s vasculature. The most popular technique is Dynamic Susceptibility Contrast (DSC) imaging, where we inject a bolus of contrast agent (typically Gadolinium) into the vein of an individuals’ arm. This bolus is sucked into the heart, and then a large portion is pumped into the head, initially travelling through the main arteries, through the capillary beds, and finally exiting from the veins. By take a series of images, we can create a movie illustrating the speed and amount of blood reaching different portions of the brain. Specifically, Gd influences both the T1 and T2 properties of nearby hydrogen, making these regions appear darker. This is very useful for understanding acute stroke (where abnormal perfusion in regions with normal diffusion suggests salvageable tissue) and brain tumors (which exhibit unusual diffusion due to mass effects, modulated metabolism and pathological leakage across the blood-brain barrier). However, there are many different techniques for analyzing perfusion data, each with their own set of implications. This page describes some of the most popular methods, with an emphasis on my own tools. Note you can also measure blood flow using Arterial Spin Labeling (ASL), but that technique is described separately by the Arterial Spin Labeling (ASL) web page.

A typical PWI sequence acquires a series of 3D volumes of the brain. For example, acquiring 53 volumes in 90 seconds of scanning. Therefore, for each slice through the brain we get a new pisture once every ~1.7s. For each individual, we typically only track the passage of a single bolus. The simplest way to analyze this data is to measure the time to peak and maximum signal reduction for each voxel by directly plotting each observation. The benefit of this technique is that it is simple and does not make any assumptions regarding the shape of bolus impulse through the scan (whereas more complicated strategies may not be as robust, see Boxerman et al., 1997; Cha et al., 2002). However, it does have a few major limitations: first the temporal resolution is limited to our sampling rate (~1.7s) and second this method is very sensitive to noise in our data (each individual sample is noisy, and we are not using information from other observations that are nearby in space and time to refine our estimate). The graph on the right shows a raw analysis of data from three voxels in the head: an input artery (red), gray matter (purple) and a vein (blue). Note that the arterial input function is early in time and creates a shorter response than the regions further upstream. DSCoMAN is a free tool that allows you to estimate raw values, as well as the ability to improve the basic linear fit with a correction for leakage described by Boxerman et al. (2006) which can be particularly well suited for tumors. Raw fitting is useful for measuring MSR, TTP and FM. 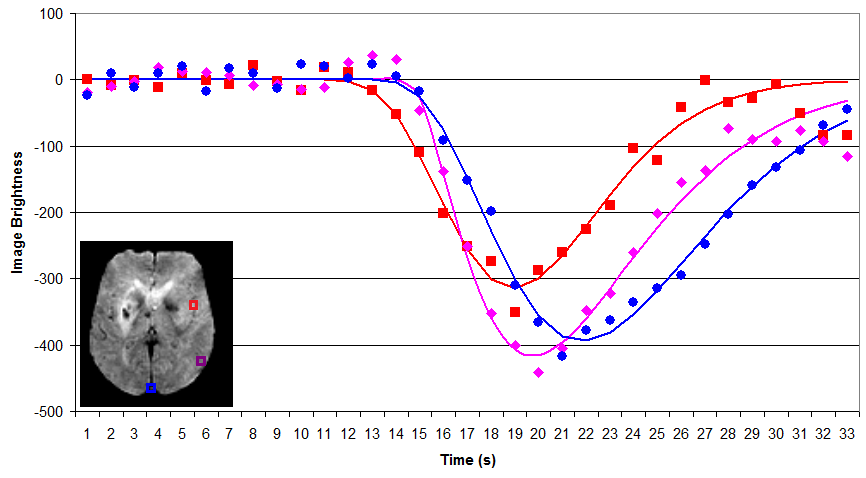 By fitting a gamma function to our data we can attempt to minimize noise and interpolate the amplitude and timing of the bolus. As long as this function accurately models the signal change present in the data, this technique should provide a more accurate measure for parameters such as MSR, TTP and FM. For example, in the figure on the right, note that the fitted function allows us to infer that the peak times and amplitude do not precisely correspond with our observations (e.g. the peak amplitudes typically does not occur precisely at the location of the marker on the figure). Despite these advantages, both gamma functions and deconvolution (described next) are very sensitive to starting estimates noisy data, and can become trapped in local minima (poor fits of the data). My own software provides a simple tool for gamma fitting.

In the input arteries, the gamma function is a great model for the passage of the bolus, as the bolus rapidly enters and exits the region. However, in gray matter there are actually two components influencing the Gd concentration: the direct passage of the contrast agent with the blood, and the residual function of Gd being retained in the tissue. This residual function is particularly pronounced and important in brain tumors, where there is some leakage of Gd across the brain tissue. Therefore, many tools attempt to deconvolve the observed signal into the input impulse response and the residual function. Relative to raw and gamma methods, deconvolution can in theory provide purer measures for the underlying changes, provide important measures for tumors. Therefore, these tehcniques are excpetionally popular. However, this technique does require a lot more assumptions, and therefore must be used with caution. Further, recent work in acute stroke (Christensen et al., 2009) suggests that for this condition TTP and FM derived from gamma fitting are at least as good as deconvolution methods – perhaps due to a combination of the robustness of gamma fitting and the fact that TTP and FM have the benefit of being less pure measures (e.g. they combine factors that each provide predictive power). Jim is a professional tool that provides deconvolution analysis.

I have written a very simple graphical program that lets you define a gamma variate and then see how well different methods fit the data. This uses the same algorithms as my imaging software. This program generates a signal with a specifed amount of noise, and then fits the data using raw values, an initial single-factor linear fit suggested by Madsen, and a refined nonlinear multi-factor fitting of Madsen’s formula using Powell’s Method. This program allows you to set x0 (bolus arrival time), xMax (time when bolus concentration reaches a peak), yMax (maximum height of bolus concentration), and alpha (shape of gamma function). In addition, you can choose to add Gaussian noise and define the sampling rate (TR). This software is available for download from the links on the bottom of the page.

If your data is in DICOM format, you will need to convert it to NIfTI (e.g. using dcm2niix ). The technique is similar to Kim et al, though it uses both an initial linear fit as well as a non-linear fit for the gamma function and does not compute deconvolution. Therefore, this software is well suited for stroke (e.g. robust estimates of the parameters suggested by Christensen et al.) but less suited for tumors (where leakage means the gamma is not a good fit). When you start a perfusion analysis you will want to check a few parameters:

After setting these values and selecting the perfusion images you want to process, the following images will be created: